One of the least known of the hardcore punk outfits tearing up the late-70s San Francisco music scene, No Alternative garnered a rabidly loyal local following during the band’s too-brief history.

No Alternative’s relative obscurity wasn’t due to any lack of chops; if anything, the band’s fast-and-furious aural assault and socially conscious lyrics showed deeper artistic influences and more intelligence than many of No Alternative’s contemporaries.

Johnny Got His Gun ‘78 – ‘82 is a 26-song collection that presents a fairly comprehensive history of the band, including side projects and early recordings. The disc offers a number of rare live recordings circa 1979-80 (taken from shows at the legendary Mabuhay Gardens, the Deaf Club and Wheeler Auditorium), unreleased studio tracks and the odd compilation contribution. All of the material has been remastered for the digital age, engineered by East Bay Ray of the Dead Kennedys.

The studio material is as crisp as any low-budget recording of the era and the live tracks are quite tolerable given their age and the primitive equipment they were captured on. It’s the music that earned No Alternative its reputation, however, a high-octane and highly flammable mix of British hardcore (think U.K. Subs or the Damned) and American punk (Johnny Thunders school) with a dash of roots rock thrown in for good measure.

Fueled by the incendiary six-string work of singer/guitarist Johnny Genocide (ne Hugh Thomas Patterson) and a strong rhythm section in bassist Jeff Rees and drummer Greg Langston, No Alternative came across more like a Bay area version of X than another Sex Pistols-influenced hardcore act. No Alternative imbued its material with more intellect and less rhetoric than many punk bands of the time.

The band introduced young punks to Dalton Trumbo with the popular anti-war anthem “Johnny Got His Gun,” (which was featured on the seminal S.F. Underground compilation) while “Rebel Youth” is a powerful call-to-arms with twangy guitar and jackhammer rhythms. The nihilistic “Life Of Suicide” features a scorching solo by Genocide that would put many stadium rockers to shame while a blistering guitar line and crashing rhythms drive “Dead Men Tell No Lies” towards chaos.

Genocide rips off a riff from Golden Earring’s “Radar Love” and sledgehammers it straight into your brain. Some of the live material here offers a glimpse of the band’s energetic and eclectic performance style. A cover of Gene Vincent’s “Be-Bop-A-Lula” is played straight with fierce rockabilly undercurrent while the Genocide original “Sir” sounds like a cross between Jamaican dub (as filtered through the Clash) and mid-70s heavy metal.

No Alternative covered Johnny Cash almost a decade before Social Distortion, revisiting “Folsom Prison Blues” with a piss-and-vinegar reading that captures the songs original intent if not its sound.

Johnny Got His Gun ‘78 – ‘82 also includes the interesting, cow-punk styled “Show Em’ All” and the generic punk rocker “Picture frame Seduction,” both recorded by an early pre- No Alternative band called KGB that included Genocide and Rees along with future Dils drummer Zippy Pinhead.

A side project formed with Mike Fox of Tools and called “Alternative Tools” yielded the half-dozen songs that close Johnny Got His Gun ‘78 – ‘82, tracks like “I Hate The Government” and “People’s Revolution,” penned by Fox, eschewing Genocide’s relative lyrical subtlety in favor of in-your-face anarchistic sturm-und-drang.

No Alternative were an important part of a San Francisco punk rock scene, contemporaries of better-known artists like the Dead Kennedys and the Avengers and an obvious influence on bands like Rancid that would follow in their wake. Johnny Got His Gun ‘78 – ‘82 rescues the band from the dustbin of history and establishes No Alternative as major players in one of the most important times and places in the punk rock pantheon. Rev. Keith A. Gordon, All Music Guide

No Alternative consists of Johnny Patterson 20, Jeff Rees 26, and Greg Langston 21. They’re one of the finest bands the San Francisco scene has to offer. You can catch them live in the City or buy the various records they’re on. There’s two cuts on the “Live At The Deaf Club” album from when the band was called KGB, one song on the “SF Underground” EP, and a forthcoming single on Subterranean Records. They played at our Ripper party January 15 at the Mab. We interviewed them just before they played at the anti-draft show for the San Jose Peace Center. This was February 6 at the First Unitarian Church, 160 N. 3rd Street, San Jose. Also on the bill was (Impatient) Youth, the Same (from San Jose), and some progressive rock band whos name we don’t care to remember. And only a dollar to get in. They’re all a bunch of fun guys and were most enjoyable to interview. Johnny is 6’1” big, oops, tall. Jeff used to live in Mountain View and work at Atari, and Greg is the newest member of the band. So here’s an interview by me, Linda, and editor Tim.

GREG: I’ve been with No Alternative since September. I was with the Wasp Women, Touchtones, and Tuxedomoon before that.

VIOLET: How long as No Alternative been together?

JEFF: It will be two years this May.

VIOLET: And what’s you explanation of what your band’s all about?GREG: We’re in it for the booze.LINDA: (to Johnny) Speak!

JOHNNY: Woof woof.TIM: Now what would you say your band’s all about

JOHNNY: The politics of life and living.

GREG: The politics of having fun.

TIM: So you’re heading in a more rockabilly direction?

JOHNNY: No. We’re pretty much open to anything. Right now it’s just the way the songs have been coming out.

JOHNNY: Hey Kevin come back here with the beer!TIM: How far rockabilly are you gonna go?

GREG: Well, we’re about as far as we can go now. We’re not gonna be really straight ahead rockabilly. We’re gonna be punk rockabilly.JOHNNY: Yeah, punkabilly.

JEFF: Yeah, I would think so.

JOHNNY: Yeha, the Gears are excellent.

LINDA: What do you think of today’s rockabilly, like the Kingbees, Levi and the Rockats-

GREG: The Cramps and the Gears are the two that I like.

VIOLET: What does your Confederate flag mean? Does it symbolize anything

JOHNNY: I don’t know if it symbolizes anything to Jeff and Greg, but to me it symbolizes a down homeness. You know, the hick attitude. Not as far as being a racist. I just like the Southern hospitality.

TIM: Are you from Daly City?

TIM: OK what’s your favorite rockabilly band from the fifties?

JOHNNY: Gene Vincent and the Bluecaps.

VIOLET: How would you describe the difference in your personal outlook now, from the KGB days?

JOHNNY: Our music has more of an advanced sound. We’re a lot tighter and a lot more polished.

LINDA: You were a blond weren’t you?

JOHNNY: Yeah. This is my real color of hair. 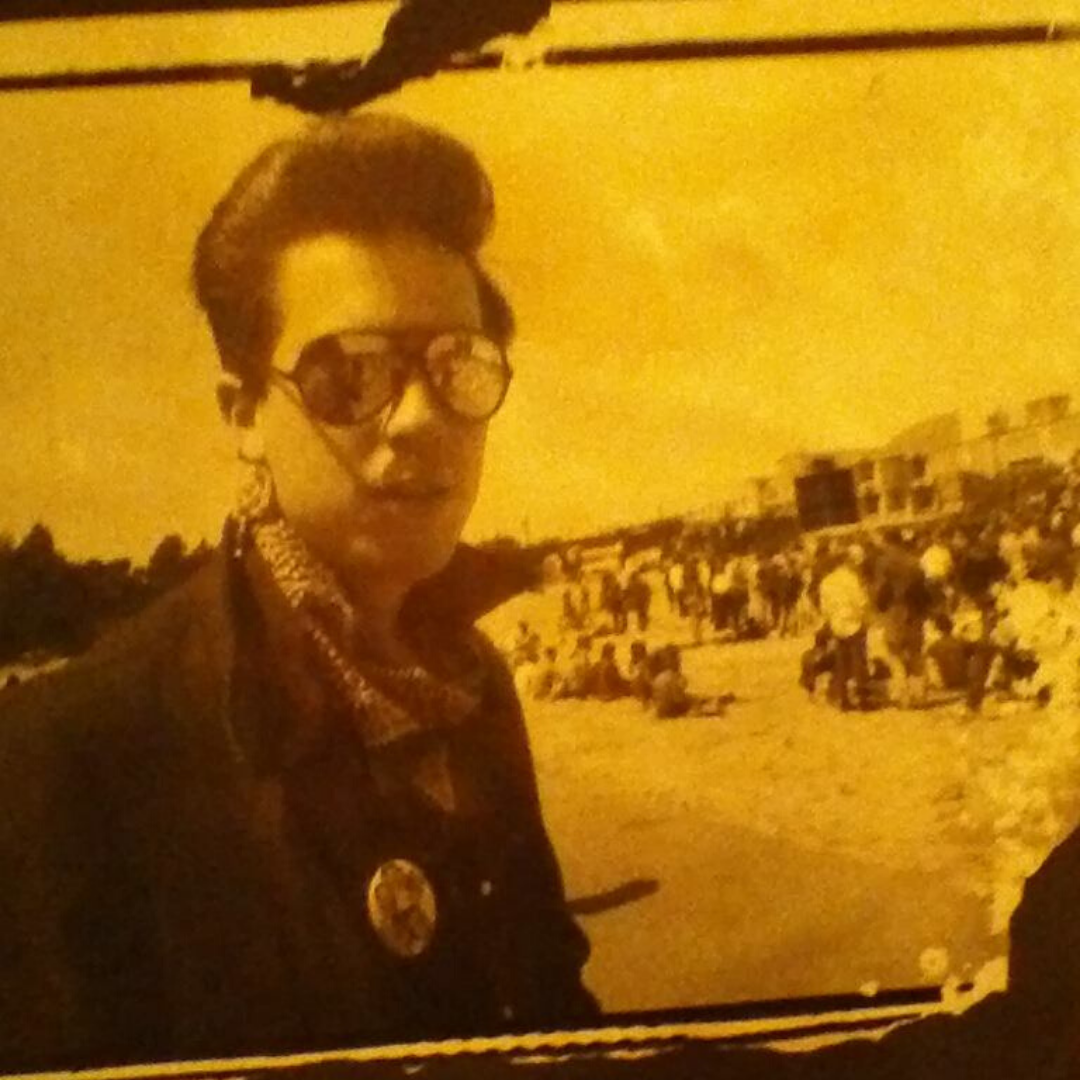