When in 1990 Guns N’ Roses matured beyond their aggressive hard rock sound, it was the addition of keyboardist Dizzy Reed and the epic tones of the Hammond B-3 that drove this stylistic evolution.

Born in 1960s Hinsdale, Illinois and raised in Colorado, Dizzy Reed had a natural affinity for the keys as his grandmother taught him to play the organ on her electric Lowrey. Listening to the keyboard sections on his father’s Booker T and the MGs, his passion was ignited and at age 12 he began touring with his own elementary school band. By 1985, Dizzy had immersed himself in the insanity of the booming Los Angeles music scene.

“It was the place to be. There were thousands of bands from all over the world, trying to be the next big thing. There was an incredible amount of energy and it was magic.”

It was as part of the club band The Wild in the late 1980s, while rehearsing and living in a shared Hollywood practice room, Dizzy befriended Axl Rose, and in 1990 he joined Guns n’ Roses on keys and backing vocals for the recording of Use Your Illusion I & II. Making the transition from club rocker to a member of the biggest stadium band in the world required the majesty of the Hammond B-3, which Dizzy employed on the classic tracks “Dust n’ Bones”, “Yesterdays” “14 Years”, and “Don’t Damn Me”.

In 2012, Dizzy was inducted into the Rock n’ Roll Hall of Fame as a member of Guns n’ Roses. He has also toured with the Psychedelic Furs and has toured, recorded and written with supergroup The Dead Daisies.

With his first solo album released through Golden Robot Records in 2018, Dizzy Reed remains in the rock industry’s ‘sharky’ waters, continuously growing as an individual and flourishing as an artist.

“Never stop learning and exploring, but don’t forget what you do best. Stick to your guns.”

In between world tours with Guns N’ Roses to sell-out crowds, and Dizzy’s side project Hookers and Blow, he has found time to enter the studio several times in the US to work on his follow-up LP.

With ‘Rock ‘N Roll Aint Easy’ being such a worldwide success, Dizzy and his band are keen to follow it up in 2020 with work already begun on this next solo project currently in Los Angeles.

We expect to have a new single and the second album out threw Golden Robot Records in the 2022. 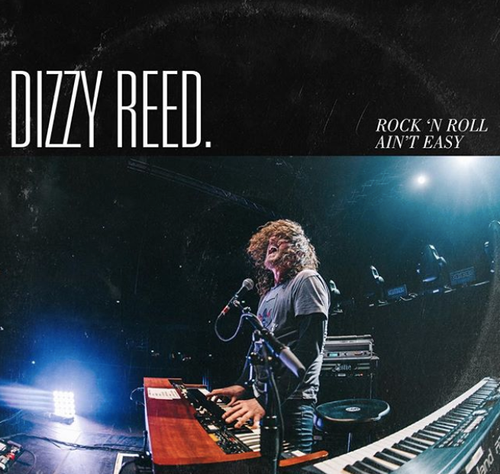