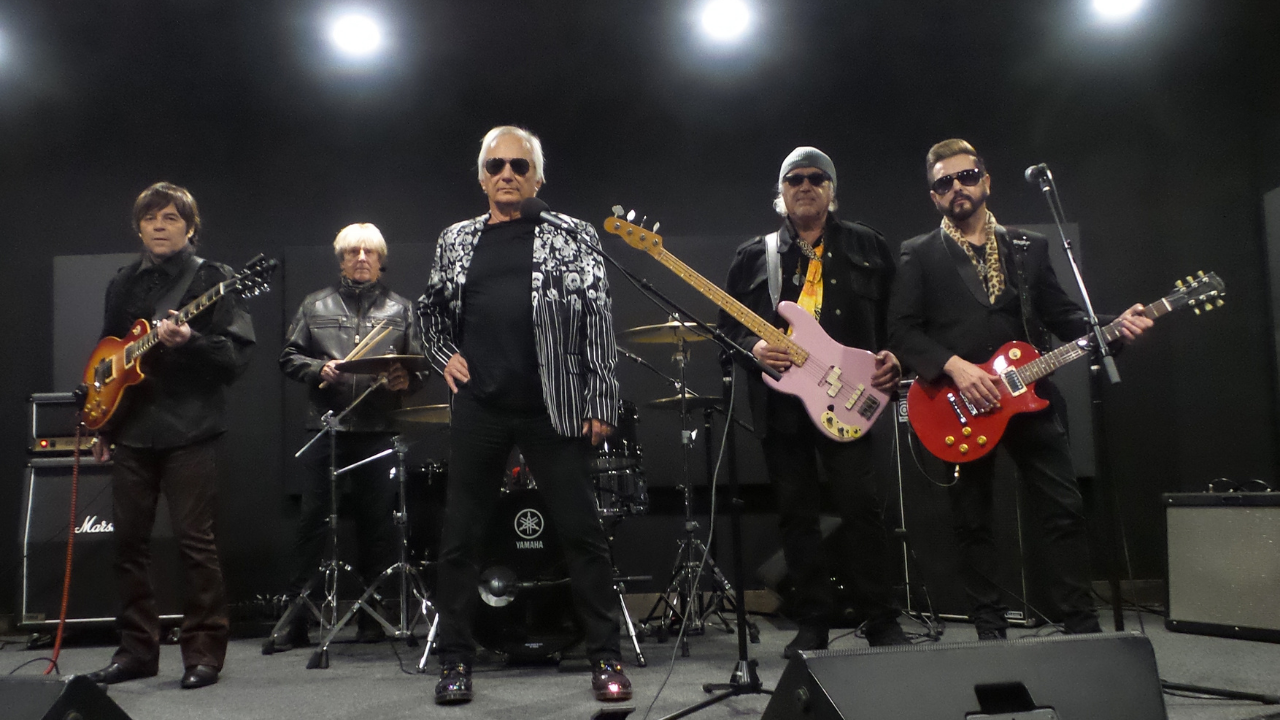 It would seem like every nook and cranny in rock ‘n’ roll history has been explored ad infinitum by this point. Countless books and magazine articles have been written, painstakingly excavating the lives and careers of everyone from Chuck Berry to Aerosmith, Wanda Jackson to Arcade Fire. But what if there was a band with deep roots whose story had barely been broached?

Such a band does exist. They are The Hollywood Stars. And now, after more than 40 years apart, they are performing together again and making new music.

“Probably the most legendary act I opened for was The Yardbirds with Jeff Beck,” recalls Rae. “Beck had a couple of songs back then that were just mindblowers. He would stand in the shadows with his back to the audience, but the sound coming out of his amps was something no one had been able to do up to that point. At least not in Hollywood, maybe Britain. Musicians on the L.A. scene were asking him ‘What are you playing through? How do you get that sound?,’ and he would just say (adopts British accent) ‘Hey man, it’s all in me fingers.” (laughs)

The group made its public concert debut headlining The Whisky A Go Go on December 17 & 18 1973. The Hollywood Stars would go on to become one of the top-drawing acts at The Whisky for the next 12 months.

In January 1974, Columbia Records A&R man Ted Feigin signed the band. Fowley had his heart set on producing the band’s debut album, but Feigin shut him down fast. As a result, Fowley handed over the management reins to Donahower and Bruce, and only became a peripheral figure in the band’s future trajectory.

Studio time was booked at The Record Plant in Hollywood to cut a dozen tracks for a debut album. Bill Szymczyk (The Eagles, The J. Geils Band) was hired to produce with Allan Blazek (The Eagles, The Who) as engineer. Among Anthony’s five songwriting credits during the sessions were two co-writes with Kim Fowley that would go on to have major success after the Stars’ breakup, “King of the Night Time World” (recorded by Kiss on both 1976’s Destroyer and 1977’s Alive II) and “Escape” (recorded by Alice Cooper on 1975’s Welcome to My Nightmare). Fowley had an additional two co-writes; Fowley associate (and writer of Steppenwolf’s “Born to Be Wild”) Mars Bonfire had three; the band covered Danny Hutton’s 1965 single “Roses and Rainbows’; and the remaining tracks were co-writes featuring Phares, De Fuentes, Rae, and outside songwriter Peter Lyons.

Despite 34 days of intense session work, the album was ultimately scrapped and the band was dropped. Through no fault of the band. “A whole new East Coast A&R team came in at Columbia,” remembers Phares. “Not only did they fire Feigin and another west coast A&R guy, I also later learned that they systematically dropped every band or artist that Feigin had signed.”

“It was a really depressing time,” recalls De Fuentes. “The sessions were going great and we were so close to finishing the record. Then it all just went away.”

A bomb had dropped on The Hollywood Stars. After a quick ascent which had seen John Lennon, Angie Bowie, and Iggy Pop applauding their live shows at The Whisky, the first lineup of the band was quickly grinding to a halt.

In October 1974, the Stars played one of their last gigs at The Hollywood Palladium as support for another soon-to-flame-out glitter rock combo, The New York Dolls. Iggy Pop, Flo & Eddie, The GTO’s, Michael Des Barres, and Zolar X provided additional support. “I remember at that gig I had a crowdsurfing moment before anybody had invented the term ‘crowdsurfing,’” says Phares.”

The following month, in November, the group would break up after one final show at The Whisky — at which they were memorialized by their former Svengali, Kim Fowley. Anthony, who had been bumping heads with Phares, was a no show purportedly because of the flu.

It would take 39 years for the scrapped Columbia album to finally see the light of day. Musician and producer Robin Wills (The Barracudas, Fortunate Sons) happened to connect with Rae on a power pop blog thread in 2013.

Wills was elated to learn that Phares was in possession of a 1⁄4- inch tape of the sessions. Studio time was booked to finesse the sound quality and Shine Like a Radio: The Great Lost 1974 Album was released on gatefold vinyl by Last Summer/Light in the Attic in 2013.

Record Collector Magazine bestowed the album five stars and called it “one of the most vital reissues of the year.” A stirring, evocative encapsulation of the Hollywood glitter rock scene, the album crackleswith the power pop drive of The Sweet and The Move, and the glam swagger of Cockney Rebel and Hunky Dory-era David Bowie.

The relaunched Hollywood Stars were soon in Sound City Recording Studios in Hollywood cutting new tracks with Canadian musician/producer Neil Merryweather. De Fuentes remembers that Merryweather was brought into the fold via Fowley’s recommendation, and that the studio time was comped by Sound City’s co-owner Joe Gottfried. “While we were at Sound City, Fleetwood Mac was in a room down the hall recording their first record with Lindsey Buckingham and Stevie Nicks,” remembers De Fuentes.

The sessions were quick and productive, with everybody feeling that Merryweather had done a great job capturing the band’s current blend of power pop and radio-friendly AOR. It wasn’t long after returning to live performance that the Stars were approached by Clive Davis with an offer to sign the band to Arista. The Stars’ manager at the time, Michael Lippman, jumped at the chance. “We were hoping to find a label to release the Merryweather album, which was completed and mastered,” says De Fuentes. “Then Clive signed us and he had his own production ideas. He wanted to recut the whole album with his producer and his string arranger. The consensus in the group was ‘Man, we just made this great record. Why do we have to do it all over again?’”

“It turned into the exact same scenario we had with Columbia, with the label having to provide jobs to ‘in crowd’ people,” picks up Rae. “So overnight all of these people we didn’t know were now involved with the band, and we naturally ended up losing control and having other people making decisions for us. We ran into that scenario repeatedly with the Stars.”

Despite their problems in the studio, the Stars remained a popular live draw in Hollywood and were eager to get out and start performing the new material in front of a live audience. In addition to playing in front of packed houses at The Whisky and The Starwood, the Stars were also booked to go on the road supporting Arista label mates The Kinks for 1977’s Sleepwalker.

The original incarnation of the band had only played outside Southern California on one occasion, but the new Stars managed to play Vancouver, Seattle, and Portland, among other cities, with The Kinks.

Shortly after wrapping the tour it was obvious that fissures within the band had begun to widen. De Fuentes remembers that during the band’s time on Arista, Anthony had received a windfall of $84,000 in royalties for his songwriting credits on Kiss’ “King of the Night Time World” and Alice Cooper’s “Escape.

But outside of buying a motorhome to curtail the chance of his ending up homeless again, Anthony was soon broke. He also wanted to go solo. The band was summoned to the Beverly Hills offices of their latest manager, Jack Nelson, who also managed Queen. De Fuentes, Rae and Rummans were told that Anthony was leaving to go solo and that the Stars were over for a second time.

Despite the departure of Anthony, and a disillusioned Rae, the now label-less Hollywood Stars continued for another year with De Fuentes, Rummans, Drier, and new singer Al Austin.

Between 1976 and ‘78, The Hollywood Stars opened for such diverse legends as rock pioneer Bo Diddley, disco star Sylvester, and punk royalty The Ramones. They also had a star-studded array of homegrown talent provide opening support for the Stars, including Van Halen, The Runaways, The Knack, and Quiet Riot.

“By the time we called it quits, punk and New Wave were what was happening in Hollywood,” says De Fuentes. “The Stars were considered the old guard.”

Forty years after the dissolution of the 1978 lineup, The Hollywood Stars reconvened for a one- night- only benefit concert on November 11, 2018 at The Bootleg Theatre in Los Angeles. The time-defying lineup included founding members Phares, De Fuentes and Rae, alongside Arista- era bassist Michael Rummans and new guitarist Chezz Monroe. The audience was enraptured at the sight of this legendary band springing back to full-blown rock ‘n’ roll glory. The band themselves enjoyed the experience and have pledged to keep it going and have played several shows in the LA area, including a sold-out show at their old haunt, The Whisky A Go Go in July, 2019.

In 2019, Rummans left the band for personal reasons. The new bassist is John Schayer. John had played with Terry and Ruben before The Hollywood Stars in a band called The Living Flame – an name given to them by Little Richard. He is an accomplished bass player, singer and songwriter – a five time Grammy contender.

After a stint with Burger records - the band is now at home with Golden Robot Records.

Latest singles through GRR “King of the Night Time World (Live)” and “Escape (Live)” are available on all streaming platforms! 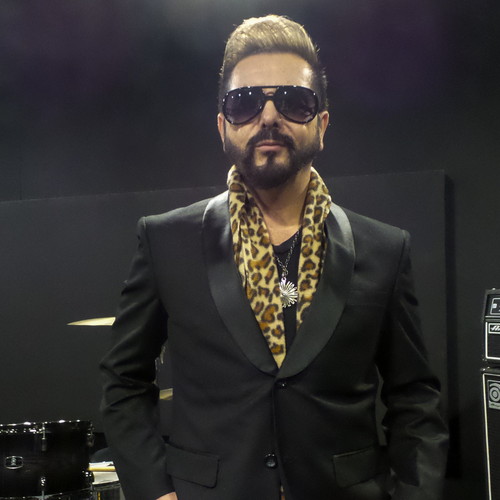 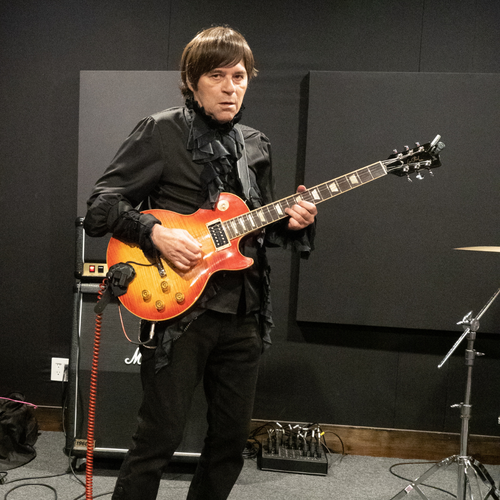 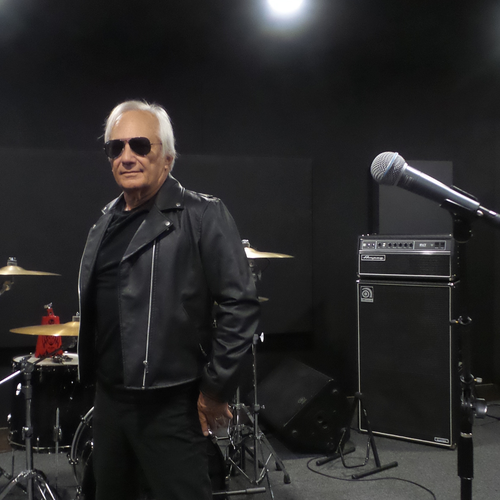 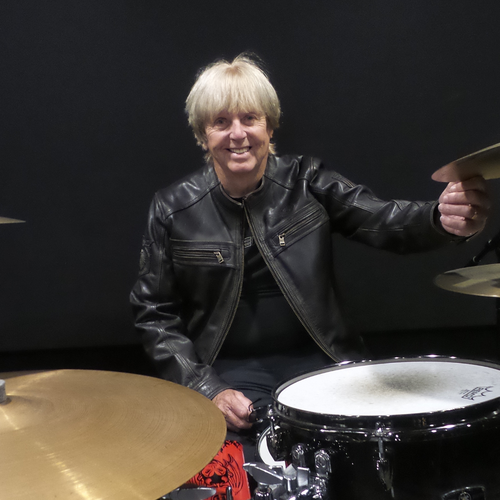