Toe to Toe mean a lot to the Australian hardcore punk community.

A soundtrack for outsiders and outcasts since 1992 – the band spearheaded the rebirth of Sydney hardcore and inspired countless bands with their no frills, uncompromising passion and intensity.

Themselves inspired by Melbourne bands that came before them, Vicious Circle, Death Sentence, and Permanent Damage along with earliest major influence US punks, Poison Idea; Toe To Toe played their first show in true DIY-spirit at a backyard barbeque next to a skate ramp. I’m a massive fan of punk rock, I feel pretty blessed to make my own, frontman and sole original member standing, Scott Mac, humbly offers still, 25 years on from the band’s inception.

Over the years TTT have shared the stage with Mad ball, Sick Of It All, Agnostic Front, Strife, H2O, 59 Times the Pain and more, played major festivals (Livid, Homebake, Vans Warped Tour…), toured the US, Europe and Japan, plus collab’d musically with several of the aforementioned; Mac was also the founder of important Australian hardcore cornerstone, Resist Records.

Yet, it’s that humility accompanied by a steadfast honesty, respect, never losing a sense of humour, dedication and remaining true to working class roots and staying the course despite the trends that are the fundamentals this five-piece have built their foundation on.

Since day one, Toe To Toe have been fighting the good fight. Fuelled by observations and frustrations of the socio-political climate and day-to-day personal experience of navigating existence in an uncertain world, TTT’s music brings solace and hope; it lets you know you’re not alone in your struggle.

People have to come together, Mac affirms. We have a lot of people come up to us as fans and they end up being our friends — it’s what it’s all about really, he says without hesitation, Toe To Toe fans are a little different to everyone else’s fans, they’re a little bit more fucked up, which is what I love! Returning the love, peers and the community of supporters have called TTT: all-time, the greatest hardcore band, the benchmark, game changers and legends! 7 EP’s, 4 LP’s, a couple of splits, compilation appearances and various other releases in, the band are as revered and relevant as ever, as they unleash latest LP, Rise Up.

12-tracks in total, Rise Up, sounds like the TTT you love but reinvigorated by looking to the past melding the band’s varied taste in music — punk, hardcore, heavy metal, oi and rock n roll. We didn’t want to make the same record again, explains Mac, it’s more listenable the whole way through…It has different production.

We had a bit more fun with it. Noiseworks’ Steve Balbi helmed production duties. At times the album could be describe as what a hardcore version of Social Distortion might sound like. This is probably the most satisfied I’ve been with a record…we’re ready to rock!

We were honoured to be part of their Australian hardcore legacy as one of the finest bands in their genre, if not, the finest. 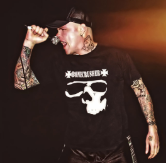 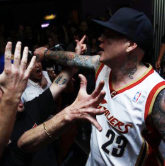 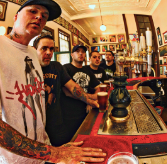 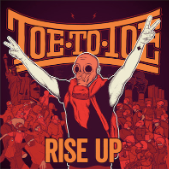