With a career spanning more than 50 years, Glenn Shorrock is one of the elder statesmen of Australian contemporary show business and has the unusual distinction of having been inducted into the ARIA Hall of Fame on two occasions, both as a member of LRB and as a solo artist.

The founding frontman of The Twilights, Axiom and ‘70s hitmakers Little River Band (later known as LRB), Shorrock carved out astonishing success around the globe, particularly in the USA, where LRB shifted the bulk of its 25 million-plus career album sales.

The album is set for release on Friday, 8 March, 2019, and available for pre-order now. It features ten of Shorrock’s favourite LRB hits, including first single and instant grat track, The Night Owls, penned by long-time friend, Graeham Goble.

BUY/LISTEN TO THE NIGHT OWLS HERE:

04 Shut Down Turn Off

Born in Kent, England, Glenn migrated with his family at the age of 10 to Adelaide in the mid-1950s. A self-confessed child of rock ‘n’ roll, he began singing in 1962.

At the end of 1974, Glenn helped form Little River Band as lead singer. Managed by long-time friend, Glenn Wheatley, Little River Band cracked the lucrative United States market in 1976 and began a string of eight Top Ten hits there and around the world, and often been credited for opening the door for many Australian acts on the international circuit. In 1995, Glenn fronted Little River Band during their 20th year anniversary, three and a half-month tour of the United States.

Fast forward to 2016 and the acclaimed singer/songwriter returned with a collection of songs composed by himself and friends, old and new, offering a mix of folk-rock and easy listening tracks with his solo album, Rise Again, also released through Social Family Records and available on CD and digital platforms.

Although now in his 70s, Glenn continues to tour constantly, with 2018 seeing the June release of his autobiography, “Now, Where Was I?” about his career with the Twilights, Axiom and Little River Band and back again. With the new solo album out on March 8, fans can catch Glenn at a run shows later that month and further into 2019.  He’s certainly not ready to slow down yet!

Glenn Shorrock’s story, when it is finally told, will have the ingredients of an epic. It’s one of ambition, global stardom, longevity and battles. Shorrock is back with his first album of new material in 16 years, Rise Again. And he’ s got stories to tell.

Shorrock, the founding frontman of The Twilights, Axiom and 70s hitmakers Little River Band (later known as LRB) carved out astonishing success around the globe and in particular the U.S., where LRB shifted the bulk of its 25 million-plus career album sales. The living legend has the unusual distinction of having been inducted into the ARIA Hall of Fame on two occasions, both as a member of LRB, and as a solo artist.

“I’ve been lucky enough, I’ve never had a proper job over my career,” he quips. “It’s one of the measures of success as far as I’m concerned. People say, what’s your success down to? It’s about surviving and keeping busy in the entertainment industry. It’s something I think a lot about now, being 72 and being a so-called rock legend, which I find amusing.”

The veteran singer isn’t caught reminiscing on Rise Again, a collection of new songs from different writers. It’ s a textured reflection of a mature, evolving artist who has enjoyed the rare sight from the summit of showbiz, and knows all too well the struggle that invariably comes with it. Shorrock taps into this struggle, and finds new energy.

It’ s no secret Shorrock and his longtime bandmates Beeb Birtles and Graeham Goble have been embroiled in a drawn-out fight over the LRB name (the trio co-founded Little River Band 40 years ago and have performed as Birtles Shorrock Goble). Every escalation in the war-of-words becomes headline material for news titles around the globe. Shorrock is battle-hardened from the experience, but never battle-weary. He went to the well and turned the fight into song. The struggle is upfront from the opening track Hear My Voice, which features the ear-catching line, I don’t care who is right or wrong/you’ve got my name/ I’ve still got my song/ I don’t care what you might call me/Hear my voice and you will know me.

“I’m not in a battle anymore. It’s only when certain situations arise that I feel as though we’ve got to stand up and say things,” admits Shorrock. “But it does get me irritable when they accept the accolades of all the work we’ve put in. It’s a long running saga.”

What began as an EP project expanded as Shorrock discovered new avenues and inspiration through collaboration. The British-born artist shaped a handful of songs with some help from former Twilights bandmate Terry Britten. “I felt the creativity coming out again. I wanted to record them and my players were enthusiastic about the songs. Graeham Goble said songs find a way into your psyche. I think that’s true.” As a fully-fledged album took shape, Shorrock reflected on his own state of mind. “During the early stages of last year as I was writing the album, I thought of calling it Grumpy,” he says with a laugh. “I’m glad the songs came along like Rise Again, which are much more of a positive to come out of negativity. That helps me in my attitude. I’m not exactly a negative person, but realistic and my feet are on the ground. I’m not an incurable romantic.”

Many millions, however, have been romanced by Shorrock’s lyrics. With Shorrock at the helm, LRB’s Reminiscing vaulted to No. 3 hit on the Billboard Hot 100, the United States official singles chart. Reminiscing is one of six U.S. Top 10 hits for the band, and 10 to crack the Top 20. The album First Under The Wire cracked the U.S. Billboard 200 albums chart and spawned the Top 10 hits, “Lonesome Loser” and “Cool Change”.

“The statistics are good, the runs on the board are great,” Shorrock admits. “It’s just my approach to what I do. I’ve never chased celebrity as such. I was just born at the right time, in post-war south east England. I got sucked into the whirlpool of rock n roll that was 1956. I suddenly arrived in Australia and, to paraphrase Keith Richards, everything turned to technicolour.”

Shorrock’s had his hands full since the release of his last album of originals, the Brian Cadd co-produced Spin Me Round from 2000. He has indulged his passions across the entertainment business, from starring and producing theatre and cabaret shows (Evita,The Rocky Horror Show, Grease and his own productions One for the Money, Go Cat Go to name just a few). In a career highlight, Shorrock produced and performed alongside the late Sir George Martin in the acclaimed, six-date 1998 production, All You Need Is Beatles. Shorrock never left the music business, he’s just been spreading-out his wings. “My passport says entertainer, it doesn’t say songwriter that’s just one of the strings of my bow. I’ve been lucky enough to write some very successful songs. None of us knew we were going to be in our 70s and singing pop songs. It’s a situation you have to adjust to and I’m lucky to still doing it. Of course it helps to have the body of work behind me.”

Shorrock always looks forward, though his live performances pay respect to the past. His typical set list will feature a wealth of classic tracks from across his 50-year-plus career, woven in with material from his latest album. “It’s an eclectic bunch of material,” he says of Rise Again. “I didn’t want to reproduce the same song over and again and not everybody is going to like everything. But I wanted it to be a very dynamic record. And I think I’ve succeeded in that.” 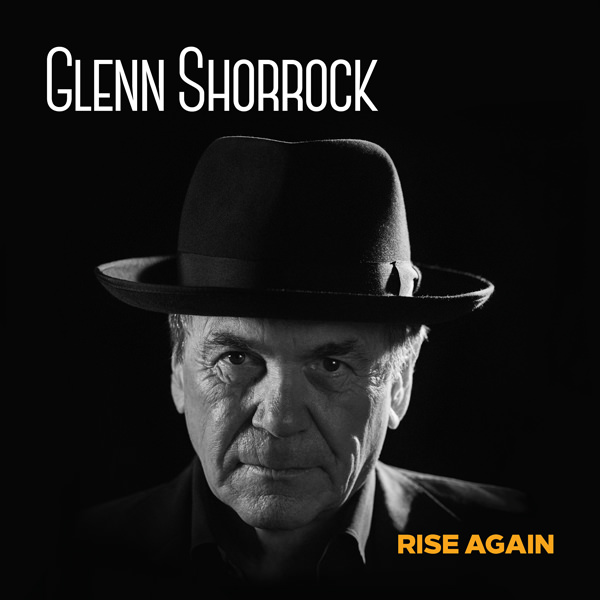