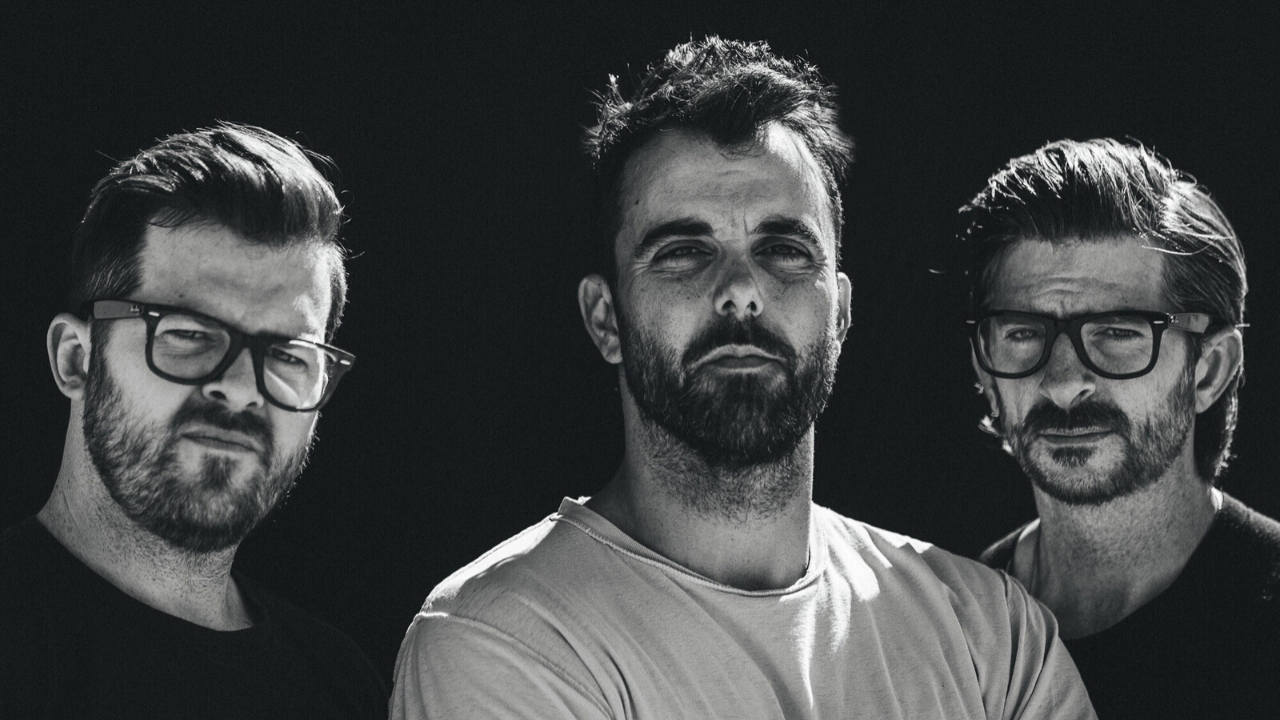 Franky Perez and The Brothers Gearing are lifelong friends who began performing together as teenagers in their hometown of Las Vegas at clubs where they were too young to belly up to the bar in.

The boys first met in 1994 on a remote desert road known to local kids in Las Vegas as the “Top of Trop”. The Top of Trop was a place where teenage outcasts went to drink, fight, and listen to music blaring from open car doors. Sean tells the story of an inebriated Perez being introduced to Stacey and him as a singer who was looking to join a band. Without any warning or encouragement and right there in the middle of the desert, Franky sang a few lines acapella to a popular song of the time. He then proceeded to ask for five dollars for a tattoo he was raising money for, and then stumbled off into the dark. A few days later Franky, Stacey and Sean met at a mutual friend’s house to jam. Within an hour, Franky had put words to one of Stacey’s riffs. Just like that, an unbreakable friendship and a musical connection between the three young men was born.

“The first time I ever stepped on a stage, Stacey and Sean were right next to me” Franky explains.

After that first encounter in the desert, years of performing in various incarnations of bands ensued. All three musicians were committed to honing in on their chops as players and songwriters. Collectively and separately the guys experimented and weaved through all genres of music without prejudice which included Reggae, Punk, Metal, Latin, Deep Funk, and straight-ahead Rock n Roll to mention a few. One genre, in particular, that was a mainstay and a passion of all three young men was The Blues.

The guys understood that The Blues was the foundation for all popular music, and that Rock n Roll wouldn’t exist without it. The Blues had inspired and was at the root of their lives, so they made it their mission to carry on the gospel.

Years had passed and all three musicians had various forms of success in music. Stacey and Sean became integral parts of the Las Vegas Music scene that ultimately gave birth to bands like The Killers and Panic at The Disco. The brothers founded and played in two seminal Vegas bands named Professor Punn and The Watson Family. At the same time, Franky moved to Los Angeles to pursue the elusive “record deal.” After years of struggle, Franky realized his dream by signing a lucrative record contract with Lava/Atlantic Records. It was then that he released his critically acclaimed debut album “Poor Man’s Son in 2001.

By 2005 Franky’s time at Atlantic had run its course and was subsequently dropped from the label’s catalog. “It would be easy to blame timing, bad management, or the lack of vision from the label, but none of that was ultimately true,” explains Franky. The truth is that he had long

battled with substance abuse. When you add unbridled youth, and a seven-figure contract to the equation what do you get? The end result is a receipt for disaster. With his body broken, money spent, and bridges nearly burned FXP returned to the place he called home…Las Vegas. “I wish I could say losing my record contract and everything I worked so hard for was a wakeup call, but it wasn’t. I had a lot of wreckage to leave in my wake before I got the message,” says Franky.

Back in Vegas, Stacey was neck deep in the life as well. He was in and out of jail, selling drugs to support his habit, getting his car repossessed, and pawning his equipment and anything else he could get his hands on to make ends meet.

Sean, on the other hand, had stepped away from music, as well as Franky and Stacey to pursue a career in cinematography. He saw the path the other two were on and decided he wanted no part of it. It was a smart move. During the years that Stacey and Franky were lost in an abyss of drugs and crime, Sean put himself through school and became an incredibly successful cinematographer and business owner. Sean’s return to music would be on his own terms.

With Franky now back in Vegas, not only were he and Stacey using together, but they were now one brother short. The drugs got harder, and the hole they had dug kept growing deeper. Somehow, despite all of the chaos in their lives, the music became more focused and brutally honest. The songs, that ultimately became the Two Man Riot LP, were born from despair, addiction, anger, and rebelliousness. It came from a place of dissatisfaction with themselves and what was happening in music at the time.

Franky and Stacey decided to do what they had always done since they were kids which was lock themselves in a room and write. This time, the only difference was that they were locked in a room with a deadly amount of cocaine and alcohol. In less than two weeks, they had written an album’s worth of music. However, now the two of them had to figure out a way to raise enough money to buy more drugs and pay for studio time. More importantly, they had to figure out a way to stay alive long enough to make it all happen.

Enter the wolf..The Wolf was a close friend of the guys and consequently Stacey’s roommate. The Wolf had always believed in them as artists and loved the new material, so he offered to lend them $3,000 to finance the project. The guys budgeted $1,500 for studio time, $250 for gas to get to LA and back, $250 for a hotel room, and $1,000 for drugs. “It was obvious that we had our priorities straight,” sighs Stacey. Within a couple of weeks, Franky and Stacey loaded into Steakhouse Studios in North Hollywood. Even in the midst of their drug fueled insanity, the two men came prepared.

Franky and Stacey wholeheartedly believed in the music they had written. In the weeks leading up to the session, they tirelessly rehearsed the songs over and over until they knew them backwards and forwards. When they finally entered Steakhouse, they were on point. The entire album was recorded and mixed in 3 days. They played with reckless abandon and chose the takes with vibe and honesty over perfect performances. They would finish a take, look at each other, and without a word know if they had it or not.

Once the album was finished, the guys had to decide what to do with it. They knew they had created something special and wanted to perform it, but at what cost? The process of writing and recording the album had left them teetering at the height of their addictions. Both men were physically and mentally broken. They decided to set the project aside for a while, get well, and then regroup. Little did they know that period of regrouping would take over 10 years.

In the years that followed, all three of the guys lost touch but stayed in each other’s hearts and thoughts. Sean continued to thrive at life and as a cinematographer while continuing to write and perform music as a solo artist. Franky continued to battle his addictions but somehow managed to find success performing for bands like Scars on Broadway (with Darron and John of SOAD) and Apocalyptica. He also wrote and performed music for 6 of 7 seasons of the hit TV show Sons of Anarchy. On March 13, 2013, a two-week bender found Franky painfully detoxing on the floor in a cell of the Las Vegas county jail while facing years in prison. Luckily, he and the judge decided he had enough. “I was done. The life I was leading could only have two outcomes… jail or death. I had experienced one and realized that I didn’t want to meet the other anytime soon,” says Franky. Upon his release he immediately entered rehab and got his head straight. He vowed to focus on his health, his family, and his career. Six years sober, Franky is at the top of his game. He went on to land a coveted gig as the singer of all-star rock band Deadland Ritual which includes rock legends Geezer Butler of Black Sabbath, Matt Sorum of GnR and Velvet Revolver, and legendary guitarist Steve Stevens.

While Franky was in recovery and Sean was out winning at life, Stacey was still battling his addictions. Franky would check in from time to time and offer to get him into rehab. The offer would fall on deaf ears, and it would be years before Franky would finally receive the text he prayed for “Hey Frank, its Stace, I’m done. I need your help.” F ranky immediately contacted Musicares, the organization that facilitated Franky’s rehabilitation. Within 48 hours, Stacey was in treatment.

Franky and Stacey are now sober, healthy, strong, and have time under their belt. They decided to start working together again as Two Man Riot. After one rehearsal, they were reminded of how special the band was. They had captured lightning in a bottle when they had written and recorded those same songs many years before.

“It would be a shame not to finish what we started with this project,” says Franky. Everything was falling into place, but something was missing. That missing piece was Sean.

It all started with a group text “Hey Sean. We’re putting TMR back together, but we can’t and won’t do it without you.” Sean was understandably apprehensive. After Franky and Stacey reassured him that they were both healthy and focused, Sean agreed to come out and jam. Once the three guys got in the room together it felt like not a day had passed. Instantly they were a band again.

Within months of reuniting, TMR was booked at the world-famous Vamp’d rock club in Las Vegas. The boys played to a packed room. Because the songs were so easy to remember and

relatable, the captivated crowd was singing along to the choruses before they had even reached the second verse. The boy’s love for each other and the music was infectious. The energy was raw and honest. Within weeks of their first performance, there was a buzz spreading through the Las Vegas music scene. Two Man Riot had finally arrived.

In 2019 Two Man Riot’s self-titled debut album will be released worldwide on Golden Robot Records. The album is best described in a lyric from the first track of the album titled Bow Down to Rock n Roll . It states, “Straight out of hell, born in the streets, this is music for your backseat. Fog up the windows, let it all hang out!”

This story was typed with one finger… The middle one. 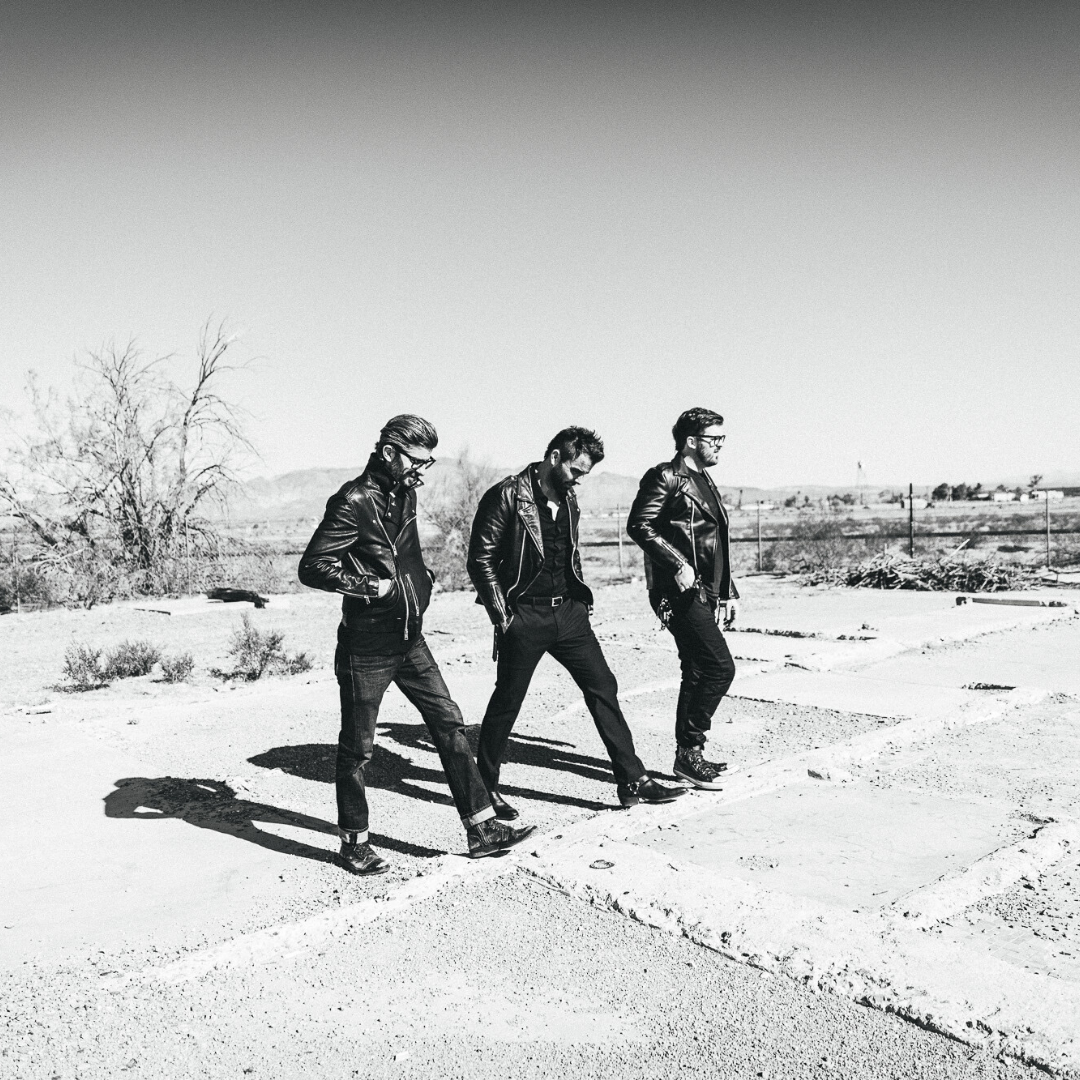 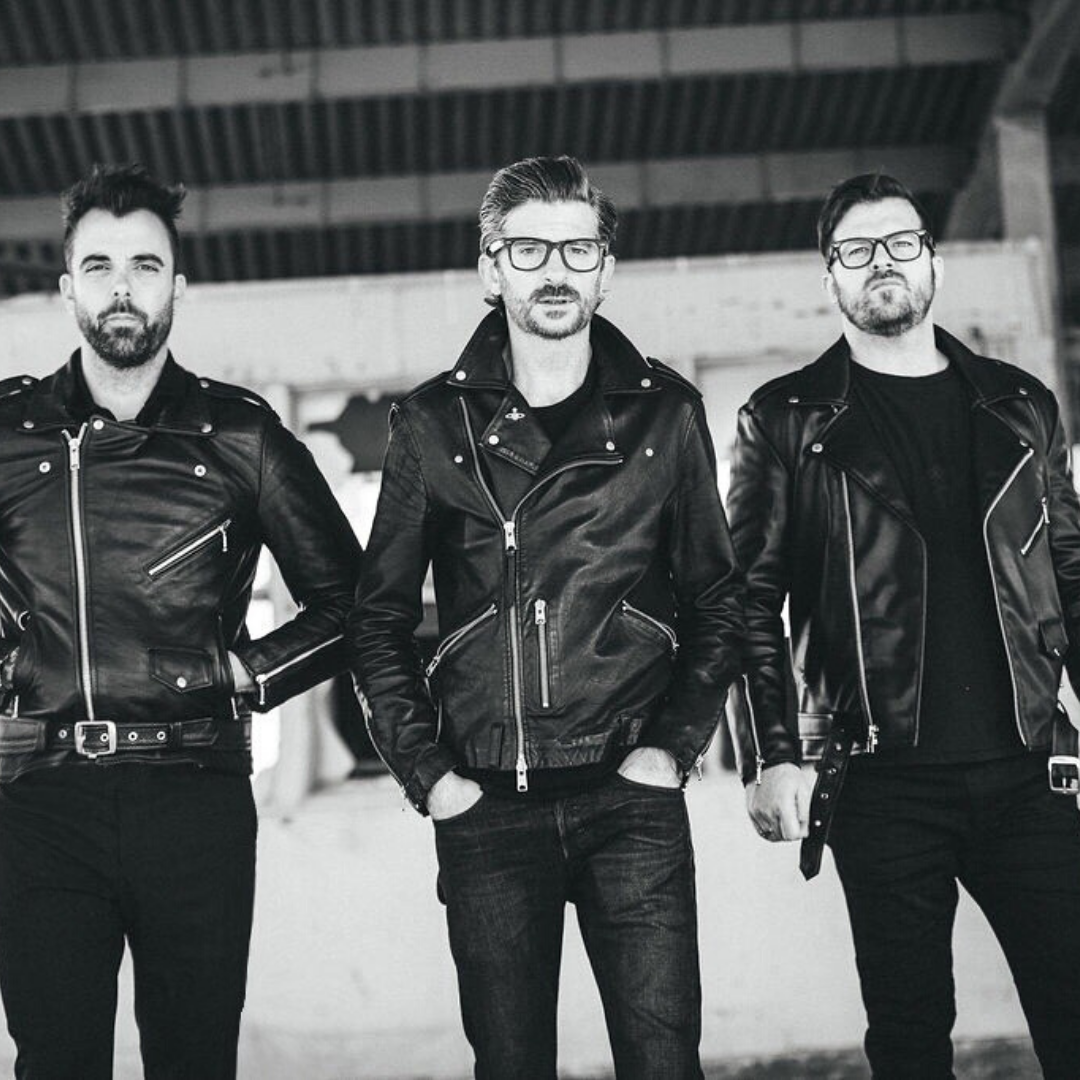 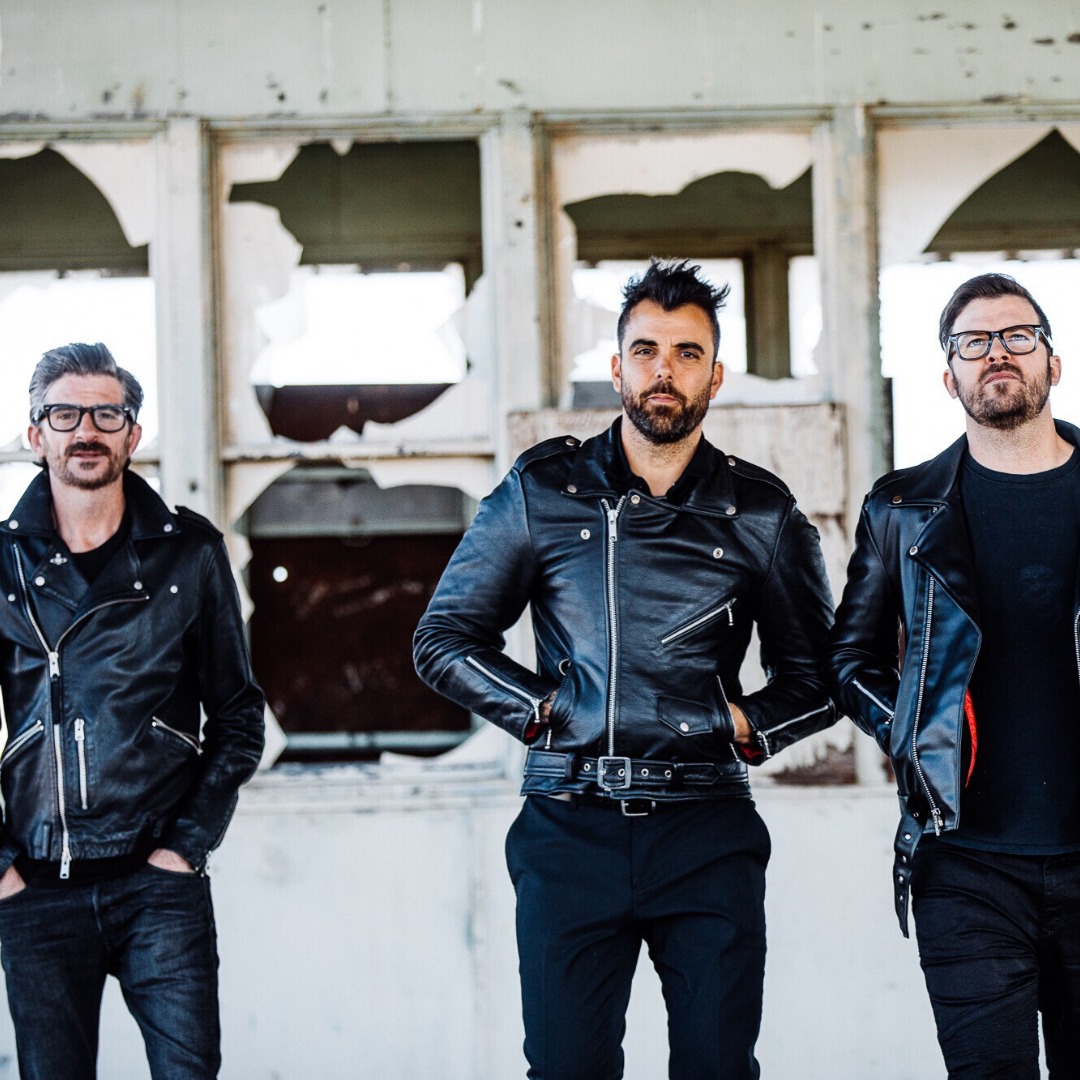 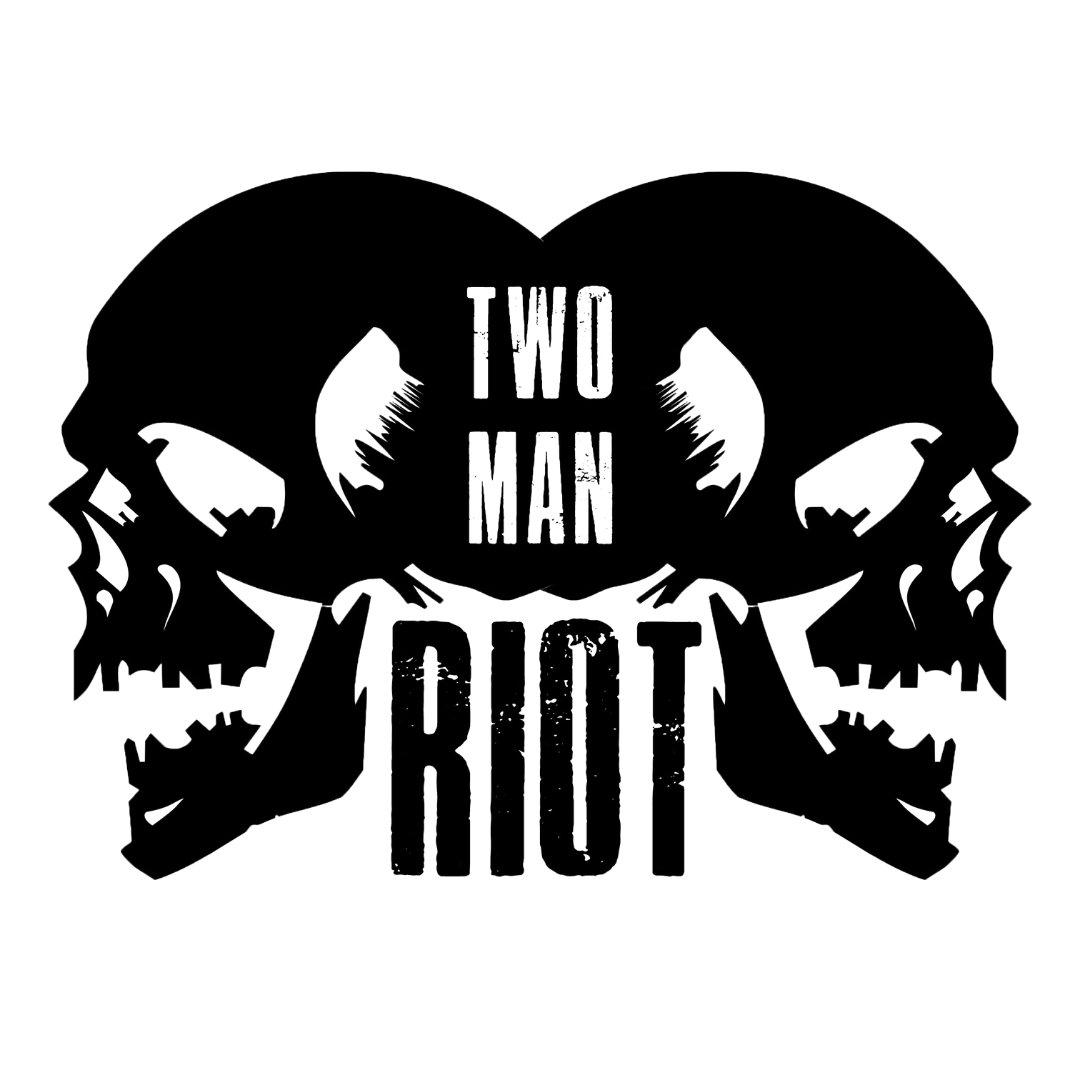